Two views of the same reality 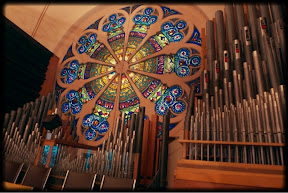 Today's lectionary readings provide us with two different views of the reality of the incarnation: what does it mean that the Divine One became a human being who created a new reality through death and resurrection?

For Paul writing to the Ephesians, it means a new, life-changing reality at the very core of our being.

I ask him to strengthen you by his Spirit—not a brute strength but a glorious inner strength—that Christ will live in you as you open the door and invite him in. And I ask him that with both feet planted firmly on love, you’ll be able to take in with all followers of Jesus the extravagant dimensions of Christ’s love. Reach out and experience the breadth! Test its length! Plumb the depths! Rise to the heights! Live full lives, full in the fullness of God.Ephesians 3:16-20

This lyrical out burst is Paul's attempt to put into words what is beyond all understanding, namely, that Christ dwells deep within us and is the source of a new life of fullness and love, a life that is so new and different that we become new beings in a radical fashion.

The gospel reading is from Luke and is far from lyrical as Jesus talks plainly about what discipleship will be like. It will not be peaceful and calm. He says he did not come to make everything nice and comfortable but rather to shake everything up, to turn everything upside down.

"Do you suppose that I came to grant peace on earth? I tell you, no, but rather division; 52 for from now on five members in one household will be divided, three against two and two against three. 53 They will be divided, father against son and son against father, mother against daughter and daughter against mother, mother-in-law against daughter-in-law and daughter-in-law against mother-in-law.”Luke 12:51-53

A disciple of Jesus the Christ will continue to live in a world that is at odds with the new life created through the baptism with Christ into death and new life. Once one becomes incorporated into the body of Christ--a way of saying once one becomes Christ--one cannot go on living as one did before. This will put one at odds with the others in one's life who have not undergone this transformation/conversion and who thus continue to live a life unformed by this new principle of life.

Both visions are true. They indicate the fact that the Reign of the Divine One has come in its fullness but not yet. We live in the in between times.
- Posted using BlogPress from my iPad