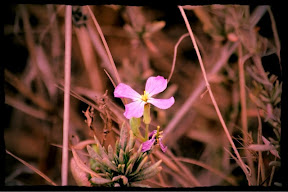 So Pilate said to him, "Then you are a king?"
Jesus answered, "You say I am a king.
For this I was born and for this I came into the world,
to testify to the truth.
Everyone who belongs to the truth listens to my voice." John 18:37

One can only communicate through one's culture. Thus for Jesus and those of his time, the powerful image of King was appropriate language to describe the Divine One and the Messiah. A king was one who held all power, whose commands could not be contradicted, and who served not through merit but through his very being. It was only natural to think of the Divine One as a king. And yet, he was not really a king at all. If he were a king, it was not a king as most people of his time would recognize. One had to be oriented to the "truth" before one could even listen to the voice of Jesus the Christ.

The danger in such "royal" language was its misunderstanding. There was a seed implanted early on that the Roman Empire would use to make Christianity the state religion of the empire. This "royal talk" would infect the language, structure and consciousness of the governance of the Church. This reached its peak during the late Medieval period and has stubbornly continued today.

Jesus used other language to talk about himself, language that Paul emphasized. It was a radically communitarian language in which we became integrated into the very body of Christ which itself contained all that had been, is, and will be.
- Posted using BlogPress from my iPad