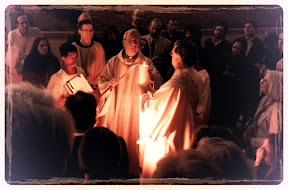 Then he saw that they were tossed about while rowing,
for the wind was against them.
About the fourth watch of the night,
he came toward them walking on the sea.
He meant to pass by them.
But when they saw him walking on the sea,
they thought it was a ghost and cried out.
They had all seen him and were terrified.
But at once he spoke with them,
“Take courage, it is I, do not be afraid!”
He got into the boat with them and the wind died down. Mark 6:47-51

Whether I understand this story to refer to my life or to the life of the Church, the meaning is the same. I and the Church exist in the world. Although not of the world, we are in the world, the world that rejected Jesus the Christ. We should expect no different. As long as I am focused on love, I know that I draw near to the Word of the Divine who is always close to me, closer to me than I am to myself. I need not be afraid, for the Word is somehow in me and I am in the Word.
Help me to focus on loving service and awareness of others. Let me always keep in mind that Jesus came to serve not to be served and he asks the same of me. This is only possible to the extent that I integrated my personality into a sense of wholeness so that the ego does not stand as some independent entity demanding attention and praise but rather as a principle of identity that assists me in realizing who I am, where I came from, and to whom I belong.
The same is true of the Church...in every respect.
- Posted using BlogPress from my iPad