The Good News according to Matthew and Abraham Maslow?

But seek first the kingdom of God and his righteousness, and all these things will be given you besides.  Matthew 6:33

These lines are the conclusion of Matthew's recounting of the counsel of Jesus about what should come first in life.  After saying that we cannot serve two masters--the Divine One and wealth--and that we shouldn't worry about what we are to eat or drink or wear since the Divine One provides that to the birds of the air and the lilies of the field, Jesus utters these words about what we are to seek first.  While it is almost too easy to apply these warnings to contemporary American life--just surf through television channels and observe the fashion, cooking, and lifestyle shows along with the overwhelming number of reality shows, I think Jesus is about something even more fundamental. 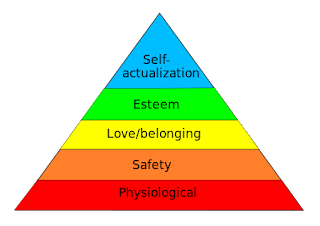 There are people who do not have enough to eat, adequate clothing or shelter, health security and even physical security.  It would be disingenuous to suggest that these sisters and brothers should not be focused on getting enough to achieve personal and family safety and security.  Abraham Maslow in his hierarchy of needs (1943) was investigating human motivation and desires.  He theorized that until the most basic survival and safety needs were comfortably met, humans would exist in a state of anxiety which would make motivation based on the "higher" needs effectively impossible.  He arrived at this model by studying healthy people rather than looking at a representative sample of humanity.  He was interested in the self-actualizing individuals and what motivated them.

When I have reasonably taken care of my physiological and safety needs, I can begin to address those higher order needs.  However, if I remain in those lower needs and become fixated on them--when I don't need to be--I enter into a world of emotional and spiritual dysfunction.  Jesus put it that I cannot serve two masters.  I have to let go of the fixation with safety and physiological well being and move into the realm of love and relationship, the realm of the Divine One which Jesus announced to all who would listen and see.

If I stay in those lower levels, I simply focus on acquiring more and more of what I already have enough.  The more that becomes ingrained in me, the more difficult it is to begin to move into those higher levels without bringing the dynamic of acquisitiveness along with me.  If I think that I can use my wealth, not just financial wealth, to acquire love, belonging, esteem or self actualization, I will be playing a fool's game because the underlying dynamic will make it impossible to achieve my desires.

In the passage that follows this, Jesus interacts with the rich young man who wants to know what he must do to achieve eternal life.  Actually he uses "inherit" which certainly suggests ownership.  One might say along with Erich Fromm, he exhibits a "having" rather than a "being" orientation.  The rich can "have" whatever they want.  They can use their wealth to "make things happen," everything except perhaps eternal life.  This eternal life of the reign of the Divine One comes only to those  who are like little children, without power and possessions and thus without pretensions that they are the potent actors in their lives.

Human culture moves in an opposite direction.  Even two thousand years ago in ancient Palestine, the culture made it difficult to leave those lower levels behind and enter into a different kind of existence.  Those of us who live in 21st century America experience a media drenched and consumer based culture which drives us all toward acquiring more and more things in order to assure our safety and security.  The competitive nature of a consumerist culture means that I constantly am asked to value myself by comparing what I have to those around me.  Economic segregation in housing has exacerbated this.  No wonder it is like a camel passing through the eye of a needle for us to enter the reign of the Divine One where the first become last and the last, first.